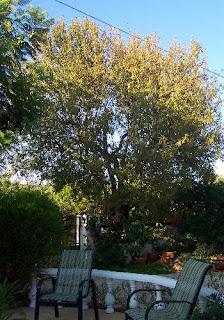 September isn't too far away and I was noticing as we drove back from lunch with friends today, that the almond trees were turning already, some to the extent that they were brown, not just dirty green.

Our own almond tree is obviously a slow starter, as it is just beginning to shed it's leaves. This is nature's way of telling me that not only is the tourist season ending, but so is summer. Soon, and hopefully, we will begin to see some rain. I know that must sound ridiculous to those of you who have suffered for months with summer deluges, but here we haven't seen a drop since, if my memory serves me well, April.

The early demise of the almond's foliage is not altogether a bad thing. The trees will be barren for only a couple of months, then will be festooned with flowers in late December and will re-coup their leaves in January while the ground around will be covered in pink-white snowy blossoms.

While many other climes will be in the midst of mid-winter, our almond will be heralding the arrival of the always early spring. A myriad of other plants will then follow closely behind. The pallet of colours that will be on display then will be shown here, but for now we must get ready for those few months where some of our flora is just beginning to hibernate, and other is just now beginning to prepare for the autumn winter flowering season.