Close Encounters Of The GNR Kind 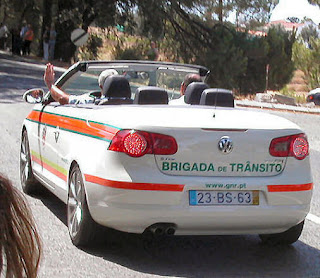 Having written some time ago about observing the GNR in action stopping and checking vehicles, we recently had the opportunity to personally enjoy the experience.

Returning home from lunch out with friends, we were caught up in a spot check. Greeted politely by our inquisitor, I was amazed how he immediately followed up with a remark to one of the rear seat passengers, in English, about how it was the law in Portugal that all occupants of a car must wear seat belts, failure to due so incurring a €100 fine. Good start.

Then he asked for all my documents, including my temporary Portuguese drivers licence. This scrap of paper, originally issued about a year ago, has long since ceased to display any legible writing identifying to whom it was issued. However, the myriad of official renewal stamps did display at least one entry that was not out of date, and this seemed to suffice.

After 5 minutes of document examination and without a fine in respect of the seat belt, we were told to drive safely. Apologies to the Officer, by my previously unstrapped passenger, were rejected. "Seat belts are for your benefit, not mine" was his response.

It is really hard to argue with that sort of logic.