Asleep At The Donkey 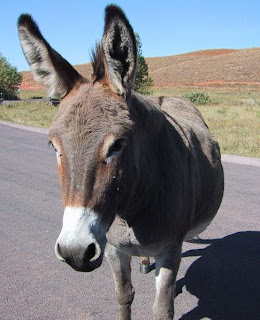 It was one of those Kodak moments when, as events would have it, there was no Kodak around even though I have attached a photo - just to give you an idea.

On the road to Alte, as we were headed out for a lunch during one of the increasingly rare moments of dry sunlight, we came upon our gentleman gypsy.

An elderly traveler, dressed in black, with his donkey and cart, headed toward Messines doesn't normally attract more than my passing attention. He was different, however. There was a demeanor about his posture as he guided his ass along the road, totally oblivious to oncoming and overtaking vehicular traffic.

As we went past him the reason for his malaise became apparent. Whether through fatigue or an early medronho-laden lunch, he was asleep. Gently swaying, slack reins wrapped around his hands, he was oblivious as the world hurtled by and his animal continued to plod along, possibly following an oft traveled route.

When we retired to Portugal a part of the reason was to learn how to unwind. We still have a long way to go.