Oh, To Bee In The Algarve Now That Spring Is Here

I had absolutely no intention to follow up from my Mosquitos posting with anything else to do with flying critters, but as nature will frequently have it, there is a sting in the tail of my good intentions.

It's mid morning, and as we haven't seen one of the neighbourhood cats who regularly graces our kitchen patio each morning in anticipation of a handout of our cats' yesterday's leftovers, we went to the shed just to check that he hadn't been locked in as has happened in the past. 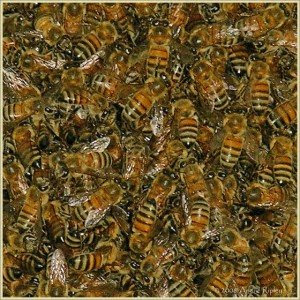 Approaching the door, sounds could be heard from inside, but not quite the meow that was expected. Upon opening the door my initial thought was akin to that of Pandora setting free all the bad things previously contained. However, in our case it was not the high-voltage buzz of evil, but the sound of bees.

Millions of bees may be an exaggeration, thousands a possibility, hundreds a certainty. Who's counting?

The bees, now no longer forced to enter and exit by some small, hidden orifice immediately moved into a defensive position occupying the doorway, a position they defended throughout the day.

As evening drew closer I had to muster the courage to advance upon this foe, as there was no potable water in the house and my liquid cache was on the other side of that buzzing portal. Showing no fear (hah!) I casually walked through the sentinels, picked up a 4-pack of water bottles, glanced up to the ceiling, to the two grapefruit sized clusters of writhing pollinators, turned and definitely got the hell out of Dodge!

Pleas for information and assistance, posted on multiple local forums, resulted in many and varied suggestions, some relating to the elimination of my visitors, others warning me of the dangers to future human existence should I do something so reckless as to attempt to eliminate my problem by 'eliminating' my problem. It was never my intention to perform an act of insecticide, nay, in true NIMBY style I simply wanted the problem to be owned by someone else, somewhere else.

Well, now it seems that someone else does own the problem. One day on from our playing host to our many buzzy buddies, they have all gone.

I can only hope that their new landlord treats them with the dignity and respect they deserve.