The Return Of The Mosquito In Moccasins 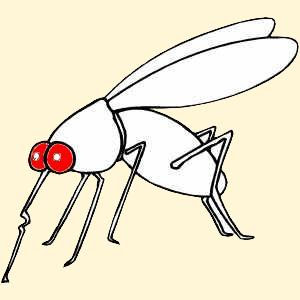 The pattern was consistent, and easily identifiable. Akin to a car desperately in need of a tune up, the sound - commencing in the distance and barely discernible - grew louder and closer. A sound made up of alphabetic Ns and Zs, something like nnnzznznnznnnzzz - then the interjection of a silent pause, like an engine mis-firing, then the sequence repeated but this time closer, louder, more ominous.

Eventually, the sound descended toward my face and emitted a doppler-shift change in tone as it rushed past close enough for me to feel on my cheek, the wind generated by it's unseen wings. (Maybe the Chaos Theory has some credence? Sorry, I digress!) I take my hand, already poised in anticipation of the attack, swat violently, making contact with my cheek and seemingly the invisible, nocturnal interloper. I can now go to sleep.

Or can I? Ten minutes elapses, I begin to nod. Then the sound, the mis-firing consonants, returns. Closer again, this time with the intent of dining in my ear. Slap! Silence, barring the self-inflicted ringing, returns. Success.

Wrong. The sequence is repeated at ten minute intervals for the next two hours. If I weren't so lazy, or so confident that I really did send the pest to oblivion during my last attempt at securing a dominant position on the food chain, I would get up and put the bug machine on. But no, I lie there and remain on the defensive, and do so until I eventually drift off.

I awake with an itchy knuckle, a slight puffy redness begging to be scratched. OK, I lost. But something really confuses me. While I could hear, on every occasion, the waxing attack, at no time did I ever hear the waning retreat. Never 'nzzznnzn, oops, you almost got me, nzzznnzn, I'm outta here, nzzznnzn'. Not a word, nothing, nada, zero, zip.

The conclusion I have been forced to draw is that the humble mosquito has learned much from the stealthy native American Indian, wears 3 pairs of minuscule moccasins upon it's diminutive feet so as not to be heard as it sneaks away 'a pé' to confuse it's prey and to plan it's next foray.

And just in case you think I'm one tube of 1% hydrocortisone cream short of relief, I'd really like to hear your explanation!