I never have been able to give a cat a single name. An official name yes, but then I always end up bestowing a nickname upon the critter. (If the truth be known, all animals could probably be given the same name - 'Food'. It's amazing how they all respond to this name being called!) In our case, we named him 'Red' because of his colouring, but he soon became my 'Ruddy Buddy'. 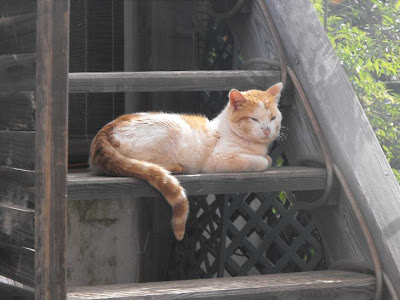 About the time our neighbour's cat came into season, Red appeared. Visits were sporadic at first, but as the days passed he became a more frequent visitor. For more than a month now every morning Red has been ready to start the day content with a breakfast made up of our other two's leftovers. And leftovers were always the intent - nothing more. Hah!

As the days progressed Red not only decided to spend more time with us, he also decided that provided we kept feeding him more and better titbits he would grace us with his presence more frequently. This familiarity growing, to the extent that home to Red has become a chair in our outdoor living room, a nest so comfortable that sleep in there could only be interrupted by the sounds of stirrings around the kitchen, ultimately resulting in another day's pequeno almoco.

Never scared by our approach or by visiting friends, Red showed all the docile signs of having at one time being someone else's pet. Well, not any more. He adopted us. He even purred for me a few days ago. Mind you, I was in the process of feeding him!

After much discussion about whether we should allow Red into the inner circle, last night we took the decision that Red should join our others in full house privileges. So today, the plans are for trip to the vets for worming, jabs, and a general once-over, as we were concerned that even with his constant eating he was gaining no weight.

But this morning Red did not appear on the patio at breakfast time. We found him eternally sleeping on the chair he came to know as home. My Ruddy Buddy was gone.

Although we never heard his last words. I would like to think that they just may have been 'meow'.