Óbidos And Óbidon'ts - Part One

With the wine stashed securely away in the boot of the car, we say goodbye to Palmela and head to the other side of Lisbon, north to Óbidos. The journey through Lisbon is fairly unremarkable, except for the fact that the directions we are following, kindly provided by Pousadas of Portugal, tell us to follow the A8 to Torres Vedras. This is a minor but annoying inconsistency, as the signposting to the A8 makes no mention of Torres Vedras. As a driver, I was working on the assumption that most roads go in two directions, therefore if I continued on I would ultimately find a second A8 junction, this one heralding our required direction. Wrong. After one set of roadworks, an unscheduled stop, map consultation, and a return journey through the roadworks we eventually found ourselves at the first, incorrectly (for our benefit) identified A8 junction. Nao faz mal. We were back on track. 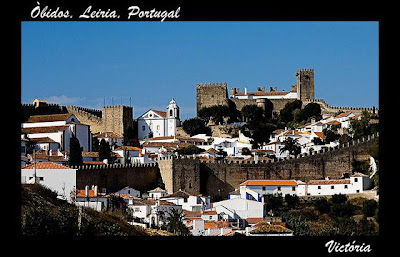 On arriving at Óbidos we wound our way through the narrow streets, climbing higher until we reached the Castle. Parking amazingly close, we lugged the cases (I now know why they call it luggage!) up to reception, to be told that our room would not be ready until 2 o'clock (it was 1:10). Why not leave our cases and go wander in the village for an hour, asked the receptionist? Well, I sure wasn't going to take my flippin' cases with me! Yeah, OK, and off we go to kill an hour.

Coming out of the castle grounds and heading down the main street we shortly came across a dark, empty bar. Perfect. Ensconced in seats looking out at the throngs of tourists, with cold beers in our hands, we could chill for an hour before returning to the Pousada.

Two or three beers later, we make the return ascent to our intended home of the next few days, only to be told that the room is still not ready, even though it's now 2:30. Strike One. With nothing really to do, we hover, look in the lounge and the bar (with no staff, else we would have had another drink) then my significant other half queries the staff about the misleading Lisbon directions. "Oh, the road in Lisbon isn't signposted to Torres Vedras" is the reply. Uh, yes, we knew that now. The directions provided to help us arrive and spend money are wrong. That's two strikes. 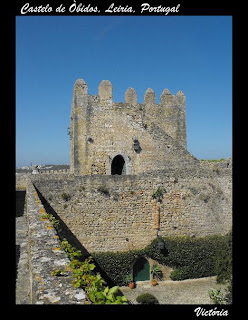 Eventually the good news is given - the room is ready. We are led through the lounge, through the still unmanned bar, up the stairs, down the corridor, onto the parapets, across the wall to the tower which we will now call home. Through an impressive door into a mini-foyer, ours is one of two suites occupying the tower. 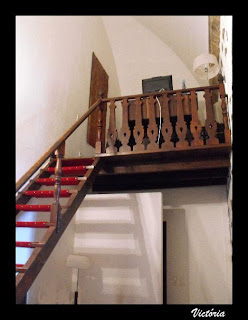 The room was a strip wide enough for a sofa against the wall to face the flat screen television which was sitting on the mini-bar on the opposing wall, with just enough room to walk between. (God only knows what they did before flat screens, as a normal TV would have jutted way too far toward the sofa to allow passage.) The bar/TV was tucked away under the narrow wooden stairs which rose to the mezzanine bedroom, which itself was just wide enough to accommodate the standard sized bed, with some walking room at the sides. At the far end of the lower room was the bathroom, replete with a genuine Wimpey Starter Homes 3/4 size bath. What ultimate luxury! The only natural light and ventilation came from the single archer's arrow-slit window and the door if left open. Eyes having finally adjusted to the light, and with the aide of every medievally dim low energy lighting appliance we could locate and power-up, we could see that this room must have taken the maid all of 23 minutes to prepare for our arrival, allowing time for her coffee break.