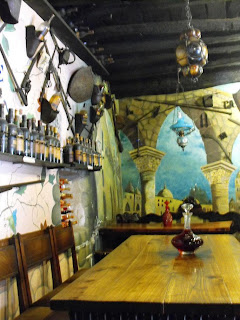 As I alluded to in Part One, while we were waiting for the Pousada to get our room ready, we wandered off into Óbidos, looking for brief respite from our journey. We found it at a bar called Ibn Errik Rex. An unusual name for a bar, not very Portuguese sounding. Well, that's correct. But, after some research I have found that the name is less of a name and more of a title. The first king of Portugal, Dom Afonso I, was known by this Muslim name, respectfully, by the Moors.

So what does all this have to do with our time in Óbidos? Not a lot. But it does have a lot to do with the decor of the bar that we adopted, and by the time we had to return to the Algarve, seemingly had adopted us.

The Moorish influence was unmistakable, if not over the top. Starkly rendered Moorish scenes decorated the walls, along with the mandatory bric-a-brac harking back to a time more noble, but at the same time more aggressive. The only thing really out of Moorish context were the thousands of miniature bottles which made up most of the ceiling. 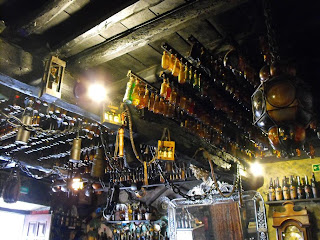 The table that became 'ours' was in the corner, from where we could see all that was happening on the street and in the bar. People came in waves. The bar was empty on our arrival, then would suddenly fill to capacity as visitors arrived en masse to partake of the obligatory Ginja in a tiny chocolate cup, then would equally as rapidly empty, leaving only us and the owner. This was repeated frequently during our multiple visits.

Having spent the afternoon there, we had no real intention of returning until possibly later that evening for a nightcap, but with a couple of recommended restaurants closed, and with our not really wanting a big meal anyway, the lure of the only menu item at the bar was too much. Linguiça assada, flaming at the table, Sao Jorge cheese from the Azores and fresh bread, €15 for two people.

During one of the populated waves, a couple entered and finding no place to sit, were about to leave when we offered them half of our table. They accepted, and we then spent a very pleasant hour talking about their, and our, travels through Portugal. They, like us, had set out that evening looking for food, and like us, opted for the only item on the menu, even though they were unfamiliar with this means of cooking sausages. Their eyes widened, as did the eyes of the entire restaurant, looking in amazement at the sight of flames leaping toward the myriad liquor bottles which hung above our heads, when the owner dropped a match into the bowl of aguadente and sausages he had placed in the center of our table. And, if our new-found friends were to be believed, enjoyed it both as an experience and as a substantial and tasty snack. 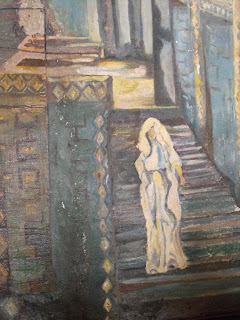 In addition to sharing our table with Erik and Rose, we shared it with the ghost of the bar, a phantasm gliding down steep alley stairs, a spectre that bore an amazing resemblance to my partner, but a few years ago, except for the fact that my good lady hadn't, and still hasn't, yet gone over to the other side.

We ended our first night in lengthy, English conversation with the owner's son. We did return the next evening, late and for a nightcap, but this time only the father was working. This night also ended with us chatting, but as now all communication was in Portuguese, it was undoubtedly slightly less subtle and took considerably longer.

That the elder gentleman took the time to speak with we transients, between the aforementioned waves of other visitors, did make a positive impression on us. After the shaky start at the Pousada, the town of Óbidos - or at least the people at Bar Ibn Errik Rex, had begun to win us over.
_____________________________________
Other Stops Along Our Journey
Óbidos and Óbidon'ts - Part One
Whine By The Case
Seven Days Without Pizza Makes One Weak
Some Like It Hot