Whine By The Case

We are the only people in the beach bar. It's still early, just a bit past noon, but we got to the Sado estuary more quickly than we anticipated. Maybe it was because this time we had a rough idea of where we were going, but forgot to take that into account when we set off. The first time we visited here it was an accident of location - we had been out for hours, saw the bar across the bay and drove until we found it - but now we are seasoned, albeit early, travellers.

It had rained earlier, and the tables and chairs were still wet. The owner looks at us as if we are mad, as the pendulous clouds on the horizon are drifting in our direction. Nevertheless, he procures a towel from somewhere, wipes everything down and takes our drinks order. After a while, and another drink, we are still dry on the outside and starting to get hungry. So, toasties and bifanas ordered, we notice that the bottle of wine is an Adega de Pegões, without doubt our favourite economy tipple. 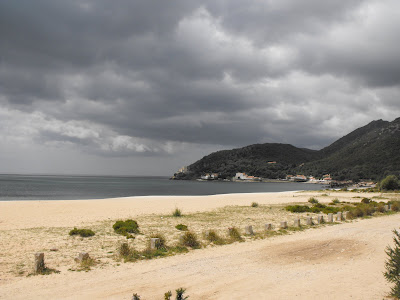 Using the 'Rotas dos Vinhos' map we had earlier nicked from the Pousada, and the information available on the bottle label, we determined that the co-operative was within reasonable driving distance. Now on a mission, lunch was an interruption of our intended days work. We had to get moving. We had to get saving.

When we arrived at Santo Isidro de Pegões, we knew we were at the right place. There was just something about the roundabout in the centre of the village that gave us a clue. 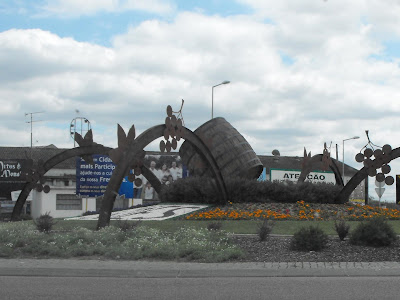 Onward now, in the direction conveniently indicated by a sign for the Cooperativa Agrícola de Santo Isidro de Pegões. Better still, and not too far away, another sign stating Venda ao Público. Yes. We were about to buy, buy big, and buy cheap.

The first indication that our intention of filling the car with crates of inexpensive vinho may have been misguided came when we pulled into the car park. Not a single car, not a moped, not even a shopping wheelie thing abandoned outside the door. Nada, bar a cat asleep on the doorstep. Inside, all manner of Pegões wines were on display, beckoning, tempting us to provide a good home. Fat chance of that ever happening!

Wines were priced at 5% to 10% MORE than we would pay in Modelo, and that was BEFORE the 12% IVA still to be added. Unhappy is a word that springs to mind, but one which really failed to convey my emotions at the moment.

Not wishing to write off the entire experience as a bad interruption of a good lunch, we found some wines with which we were not familiar. We decided that as we had come this far it would be a tad bit churlish to leave without purchasing anything. We decided on a few to try, conveyed our choice to the girl in attendance in the shop and then waited while she went through the process of having to create four copies of multiple invoices for each of the different wines selected, my name mis-spelled consistantly on each document. Why we needed two copies was beyond my comprehension.

The sting in the tail was diminished slightly, when the clerk explained to us that in the cases of six bottles, we were in fact only paying for five. One bottle was a bonus, a gift, a bountiful offering set out to appease our annoyance. The effect of this benevolence was to bring the cost per bottle down to about what we would pay in a supermarket.

So, we had cut short our lunch and laze by the beach, driven an hour with the prospect of another hour's return journey, only to end up paying exactly what we would pay at home for the same tipple.

Taking a pragmatic approach to the entire experience, I guess that our propping-up of the Santo Isidro economy will ultimately ripple down to the inhabitants. And to the maintenance of that roundabout.