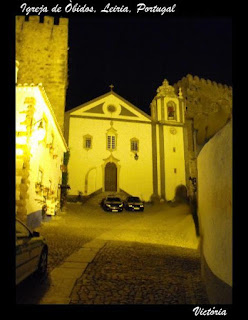 Climbing for the final time, up the hill to the pousada, it was almost impossible to imagine that just a few hours previous, this pavement had been awash with tourists swarming over the wares displayed in the gift shops, chatting noisily, and in the case of the planeload of Japanese visitors we encountered, clicking repetitively and animatedly at things both stationary and human. Now deserted, it felt as if we were walking through alien territory, a feeling enhanced by the glow of amber lighting upon whitewashed houses, shops and churches. The drizzle of but a few hours before had not yet dried on the calcada, making the vertical trek as treacherous as it was eerie.

Settling in for the last time in our 'rooms' at the pousada, we became aware of a distant droning sound, a sound we attributed to housekeeping machinery, possibly a washing machine or dishwasher. However, as the night dragged on the sound never ceased, never even altered in pitch as one might expect of a machine cycling through it's cleansing rituals. If this unwelcome interloper was preventing our night's sleep, surely it must be doing likewise to our neighbours in the adjoining suite.

Pondering on that fact, we then realised that while we had quite easily heard sounds from the adjoining room on the previous night, tonight there was no obvious sound of human occupancy. When this thought was twinned with what happened next, we knew we had found the source of the unwanted noise.

My other half had climbed down from our loft to use the toilet, and when she switched on the lights, the extractor fan burst into it's song, in complete and unwavering harmony with the other unseen but definitely heard musician.

A 3am phone call to reception ascertained that the neighbouring room was in fact unoccupied. Our request to have someone check the room was agreed to immediately and in under a minute the sound of the machine was joined by the sound of feet scurrying across the parapets. The groan of a door opening was instantly improved upon by the cessation of the drone. The door closed, the footsteps faded into the distance, we fell asleep...

...to be awoken by the return of pousada staff, this time in multiples, to examine the scene of the crime and to hold lively discussions, seemingly about the events which led to our complaining about the noise in the first place. The interesting fact which came to light, both figuratively and physically, was that the thin wall which had been erected to divide what may have been a reasonable sized suite in to two monks cells had ceiling-high air bricks for ventilation - between the two rooms. Turning the light on in one room cast a cozy glow in the other. Sound, working to the same physics, acted similarly. 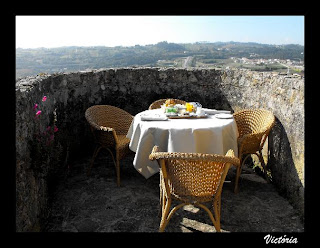 So as to not be entirely negative about our days at the Pousada do Óbidos, let me conclude our journey, and it's tales, by saying that our final breakfast, served al fresco at a table high on the castle walls, overlooking the walled city of Óbidos was almost worth the difficulties we encountered at this particular venue.