I can not believe that after only one visit I feel inclined to add Il Cappuccino to the Algarvean Daze list of Cafévourites. But here it is, our second cafévourite.

For some months now friends of ours have been suggesting that we join them for a meal at an Albufeira eatery where, they insisted, a tasty three course meal with wine and coffee was on offer for the less-than-princely sum of 6.50€. Eventually we could no longer dodge the invites, so earlier this week six of us - four 'regulars' and we two neophytes - descended on Il Cappuccino.

I can say without much hesitation that I don't normally rate Formica and flourescents as being the height of restaurant chic. Had I stumbled upon this place I would have walked straight past, not straight in. However, as our friends had booked a table (In a café?? My mind boggled!) it would have been a bit churlish to walk away at the last minute. 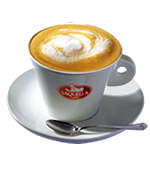 I'm so pleased we didn't do that runner! Firstly, we went to the only table already laid for six (in fact, the only table laid) where were greeted by the owner, Nelson, who ascertained our drinks order. A good, prioritised start. Then he advised us of the specials of the day and gave us time to ponder the menu. Our friends then told us that for the set price we could have either the daily options or chose from the menu. No tourist menu, no yesterday's overstocks, but al a carte at a fixed price.

The food was plentiful and tasty, the wine, albeit of the jug variety, abundant and drinkable, the service efficient and Nelson and his wife Gabriella, the most convivial of hosts. How long they will be able to continue to produce a board of fare at such a price is anybody's guess.

Locating Il Cappuccino is not that hard, from the worms roundabout head north 50 metres to the next roundabout (Pingo Doce), turn right, follow the road past the library (on your left) 100 metres. Il Cappuccino is on the right. Google Earth puts it here - 37.096144 -8.230702

A final word - if you plan on dining after 8pm, make a booking. Within 30-45 minutes of our arrival there was not a table to be had. It seems like quite a few people like value for money!